A new species of Pectenocypris (Teleostei: Cyprinidae) from peat swamps in Sumatra 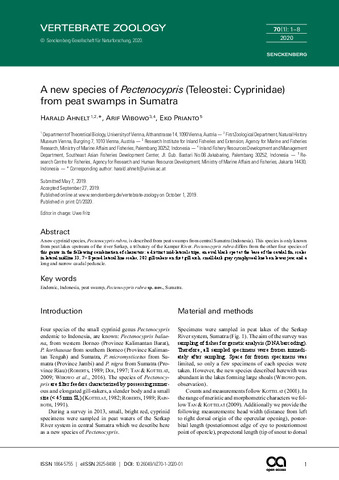 A new cyprinid species, Pectenocypris rubra, is described from peat swamps from central Sumatra (Indonesia). This species is only known from peat lakes upstream of the river Serkap, a tributary of the Kampar River. Pectenocypris rubra differs from the other four species of this genus in the following combination of characters: a distinct mid-lateral stripe, an oval black spot at the base of the caudal fn, scales in lateral midline 33, 7 –8 pored lateral line scales, 202 gill-rakers on frst gill arch, small dark grey symphyseal knob on lower jaw, and a long and narrow caudal peduncle.